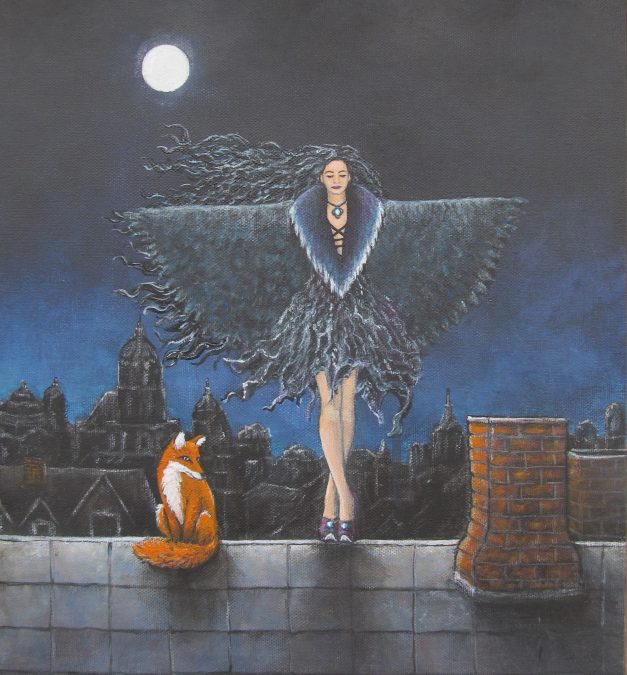 Tonight….she is black as night with just a touch of moon glow. She is a dark Jewel silhouetted against the city skyline.

Earlier today, she was her usual almost shy self. An on-purpose wall flower dressed in quiet colors, she preferred an unobtrusive life filled with music, paintings and books. She lived in a tiny attic apartment, generally content with her large marmalade-orange companion, and chief source of comfort, Cinder. Together they enjoyed a comfortable and unexciting routine; the rhythm of their days much the same from one to the next. Sameness was safe.

Jewel had been taught to do what was expected of her. Always. You did not let people down or neglect responsibility. She lived by that simple rule…right up until the evening she gave in to the sing-song request of the night-shadowed breezes. They offered an irresistible invitation through her open bedroom window, swirling tantalizingly around her until expectations and duty faded into nothing.

She’d been ignoring the mounting frustration and compulsion to bolt for freedom for years now. Tonight, finally, she gave in. She was restless and bored and no longer able to pretend that fulfilled duty was enough.

Coaxing her away from normalcy, the whispers on the wind pulled her to the rooftops, ghostly fingers tugging gently through Jewel’s neatly braided hair and blowing her skirt every which way. They sang to her of fantasy, freedom, flirtation, and half remembered dreams of feathers and flight.

Lulled by the night’s soothing music into discarding the cares of the mundane, her arms rose in instinctual movements as she closed her eyes and visualized darkly graceful birds dancing above windswept shores. Glancing down, she saw her simple dress shimmer into an airy drift of smoke and inky gossamer flutters. Her hair, with its midnight blue glints of light, streamed behind her, waving as a banner of proclamation. Jewel knew she had finally found her element, her place….and it was not what anyone had ever expected of her.

Her darling cat had also discovered truth. Much as Jewel’s long-worn public persona had evaporated in moonlight, Cinder was no longer fatly feline, but defiantly fox! And somehow, Jewel wasn’t even surprised. It seemed so right. As if she had always know that a clever fox hid under the docile cat mask. They had both dropped their ordinary glamours to reveal their real selves.

No longer shy, tidy and proper, but unrestrained and ready to leap into the darkness…unafraid…buoyed by heart songs, secret wishes, and mystical imaginings made solid in moonlight. Tonight marks the beginning of a brand new life.

(An extra special thank you goes out to Carla Clark for coming up with the perfect title for this painting!!)