People always wonder about the name “Owl’s Flight”.
I’ve had a fascination with owls since I was a very little girl. My favorite puzzle depicted different species of owls. They were one of the first birds I learned to draw. I’m not sure why, but owls always intrigued me with their air of mystery.

My great-grandmother passed away when I was five years old. My grandmother chose small items from Great Grandma’s jewelry for my sister and me as tokens of remembrance. My sister was given a  beautiful, golden angel pin. I received a pin also, in the form of a little, silver owl with green jewel eyes. I adored that pin. Even as a five-year old child, I knew it was something special, in so many ways. 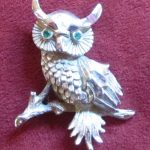 How many treasures from early childhood  survive moves, changing tastes, or even  simple neglect, and accompany you on your journey into adulthood? My little silver owl, affectionately named “Hooty” by my five-year old self, is still with me today ~ over forty years later. He lived in my pocket as my good luck charm during dreaded exams, high school speeches, my driver’s test and the horrible SAT’s. He came out of hiding on special occasions as a treasured accessory, or, later, to be carefully handled by my own young ones as they inspected every item in Mommy’s treasure box.

When I arrived at the stage of my life where I finally learned to disregard all the well-meaning advice about avoiding an art career; it was a given that Hooty would be my mascot and logo. “Owl’s Flight” was not a name I had to think about or choose; it just simply was.

This name is very symbolic to me. It is about the mythical connection between hidden life and the natural world around us. The owl is myth, mystery, magic and wisdom. Owls are silent but all-seeing. They see into the secret corners of the world.

Those often neglected, hidden corners of each of us contain the essence of who we really are. Here lie the fragments of ourselves that fall away and flutter to the floor, unnoticed, as we hurry along, busy with the experiences and emotions that are constantly clamoring for our attention. These are snippets of the authentic us, the beings that live behind the masks we present to the world.

As we grow, we learn to savor and cherish the previously imagined “unremarkable” bits of who we are. These forgotten remnants of our past that drifted away unnoticed; we no longer take them for granted and seek to rediscover the lost portions of our genuine self.

Glimpsing misplaced parts of yourself ~ an unexpected gift much like finding a feather on a familiar trail you walk every day. Feathers fascinate me, and I suspect, most humans. They are a symbol of being free of the gravity of the mundane world. I have a vase full of found feathers, each different, unique and cherished. They are tokens and offerings from nature, as I journey along familiar, well-worn paths that now spiral inward toward long forgotten corners.

I have always tried to plan things down to the tiniest detail, making sure that every possible “what if” was accounted for. Lately I have learned that my life is a giant leap or flight into the unknown. Each of my experiences, heartaches, joys, successes. emotions and dreams are woven together to shape my own personal expedition. The unexpected frosting on this odyssey has turned out to be the unearthing of my own unrecalled feathers in the hidden corners.