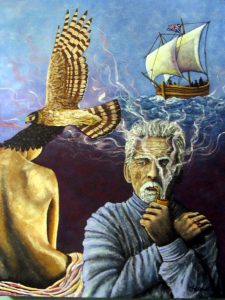 “Pipe Dreams” was chosen for the cover of Northern Journeys

Northern Journeys – A Magazine of the Arts, Humanities and Sciences
Vol. Nine, No. 3 (September- November 2006)

As we go through an album of Theresa’s work, the theme of her work as a progression of her life dominated by her deep family connections and the magic of existence reveals itself. Theresa began drawing at an early age and moved into painting. Spirited on by her art teacher and grandmother who had provided her with her first set of paints, she had her first exhibit at the age of fifteen. With several aunts and uncles also connected to art, Theresa grew up surrounded and nurtured by those who saw art as an ongoing expression of their lives.

This tradition continued as Theresa home schooled her son until he reached high school age and her daughter, who has one more year until she continues on to high school. Other academic lessons fill up four days a week, but Fridays are reserved for art. Her children’s rooms have been ever changing murals depending on their developing tastes. Her son’s room went from Dazzle, the dinosaur, to wizards to dragons.

Theresa described her children as her toughest critics as well as her biggest support group and a constant source of nourishment for her imagination. Her husband has always been a supporter, too. Theresa showed me a picture of a cougar that she painted when she was sixteen for her boyfriend who later became her husband.

After five years in Las Vegas, Theresa and her family found north Idaho and realized it was where they wanted to raise their children. Her husband, who works in construction, sent out resumes and got two responses from Coeur d’Alene companies, but the family wanted to live farther north. Finally an offer from a Sandpoint firm made that possible.

Having done nothing in the way of art in the Las Vegas years, Theresa found new energy and a further movement toward the fantasy connection in her work. She loves to paint for family and close friends. When we looked through her album I noticed that many of the pictures have been gifted or dedicated to family and friends. She loves to paint for children and has created murals about the countryside for her friends’ children. One mural has changed throughout the years because the child wants something added each time Theresa visits.

Theresa’s business cards bear the name “Owl’s Flight”. When I asked her about the origin of this title, she showed me the following: (from her website)

“People always wonder about the name “Owl’s Flight”. This name is very symbolic to me. It is about the mythical connection between hidden life and the natural world around us. The owl is myth, mystery, magic and wisdom. Owls are silent but all-seeing. They see into the secret corners of the world. Life is a flight into the unknown – the possibilities – the experiences and emotions that are stored up to weave the journey of our days.”

“I always have whispers in the back of my mind about the different projects I’m working on – that pull towards color and creation. I try to paint several times a week, but there are days when I HAVE to paint. I need to get those whispers and ideas out and onto canvas.”

“When I am painting, life around me ceases and I get lost in the world I am creating. It’s a fascinating world of things that intrigue me – vivid color, light & shadow, humans & wildlife, mystical creatures & mystery – all stirred together with my imagination. These things swirl inside my thoughts and dreams. The ideas simmer until they finally are ready to explode onto canvas. Converting emotions and thoughts into reality using the vivid colors I love. I thirst for it. It’s always a process and often a struggle, but I feel compelled to do it.”

“When I begin a painting I have a good idea about the subject and feeling I’m going after. I have learned not to plan the painting beyond the most basic aspects. By the time it is completed, it has always evolved into something much different than originally envisioned. Each painting takes on a life of its own. The trick for me was (and is!) learning to let those hidden & often unimagined scenes come through onto the canvas. Nature & Spirit have a way of weaving themselves into whatever I am creating. That sense of wonder and magic – the fantastic – that which is beautiful & sacred – these things appear in my paintings in ways I still don’t fully understand. Each painting I finish is a lesson. I’m learning new things each time. The joy and surprise of what appears on my canvas has me completely hooked!”

I first came across Theresa’s work at the Groove Studio in Bonner’s Ferry. In looking at her art I found myself pulled into creating a story that would make me a part of the story and make me a part of the picture. Later when reading some material about Theresa I found a quotation of hers: “The biggest compliment I’ve gotten is when people tell me they experience a longing to become part of the painting itself.”

Theresa’s work can be found at the Groove Studio in Bonner’s Ferry, Idaho. You may reach her at: www.owlsflight.com