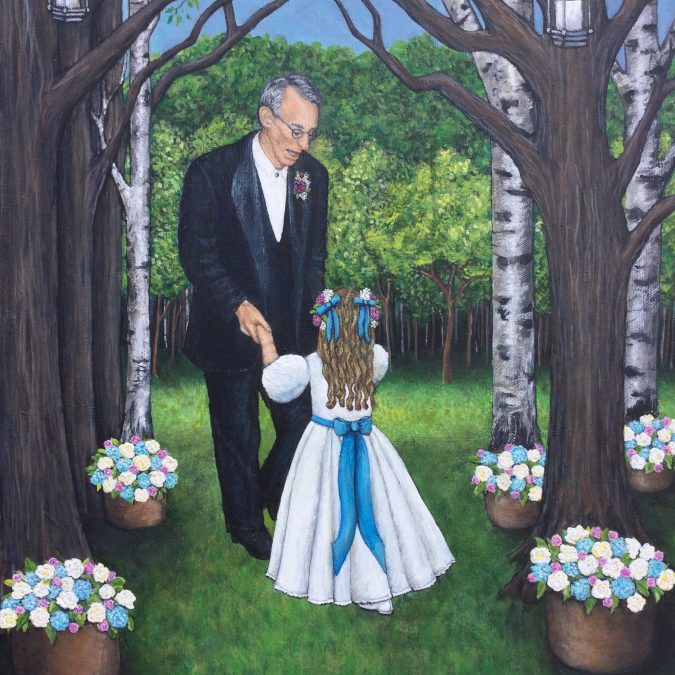 When I got married, back in the mid 80’s, my littlest sister was about 4 years old and acted as our flower girl. She was absolutely adorable with little french braids and a pretty white dress. She was very shy about walking up the aisle, but was eventually persuaded to do her part. Later that evening, someone snapped a great photo of my dad dancing with the youngest of his three daughters. The smile on his face says it all and this photo became a favorite of Dad’s.

Flash forward a decade or so to the late 90’s. My four year old daughter was all dressed up in curls and bows to be the flower girl in my middle sister’s wedding. She was adorable and super into all the wedding festivities. She had a special dance with Grandpa that night and again, someone snapped a great photo that became a treasured family favorite. The smile on Dad’s face speaks volumes.

It was so reminiscent of the other wedding photo. Here he was at another family wedding with another little girl all excited to be part of the wedding party. He was a grandfather now and  pride in family runs deep in Dad’s DNA. He loves the idea of the legacy he leaves in the form of these dancing memories.

I’ve known for years I wanted to paint this scene for him. This last Father’s Day I was finally able to present Dad with my version of  “Dancing with Grandpa”. (I was planning on mailing him the painting, but all the fates conspired to bring us together and I was able to give it to him in person!) He is a spry 87 now, but still has the lines and all the moves. We love it when a family event, “good” music and remembered lyrics push him into motion.

I grew up watching Dad on the dance floor at weddings and reunions and always felt he was a Midwest version of Fred Astaire. Dad didn’t tap, but he definitely had the style and the lean grace. He wore cool suits like Fred, but my Dad wore cowboy boots. (And they were always shiny!) Dancing with him was a memorable experience when you were one of his girls. He always looked at you from afar and pointed at you with a big smile and a head nod, to let you know you were his choice for the next song. He told you how pretty you looked, held your hand while he jokingly sashayed his way out to the center of the floor, humming along to help you find the beat and the perfect sway,  then he’d grin at you as he helped you twirl so your dress would flare out. You knew you are the center of his world at that moment. (Does it get much better?)

It hasn’t changed much all these years later, even though all of his girls are now grown women with daughters of their own. We all still stand in line to dance with Dad. He still tells us we look beautiful, still sashays to the music, still ushers us out to the dance floor like we are royalty, and still grins at you when he helps you twirl. How cool that his granddaughters are able to share the same experiences.