Tales of a Witch’s Cat 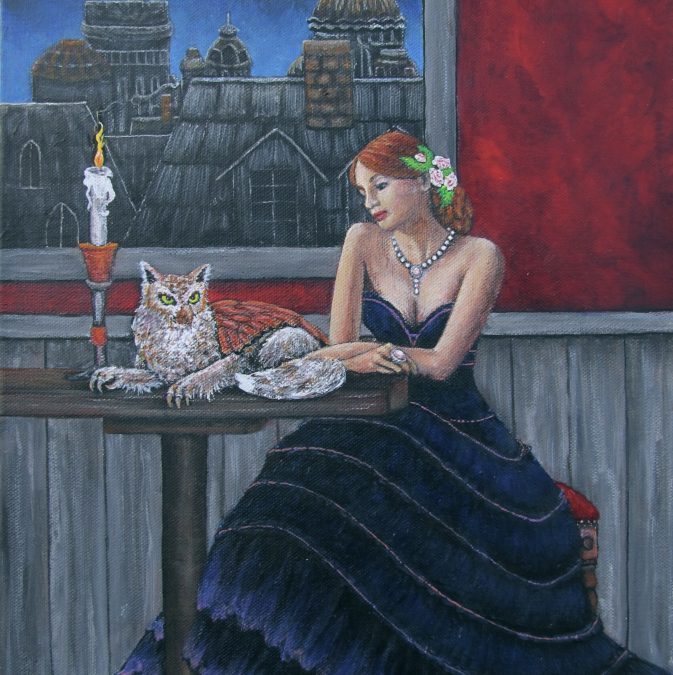 And here he was, again. In the not unfamiliar position of being the unfortunate recipient of “things gone wrong”. He was sitting and waiting quietly, as his girl fretted and fumed and attempted to get her magical skills sorted out so that she could get on with her very important evening. He was trying to be patient, and he had much familiarity with patience, though now, it was more of an exasperated patience. He knew from long experience that tension was rising, and she was about to hit the high mark of frustration as “she must not be late!”

He knew she’d been looking forward to this special night for months. Ever since that day last spring when the heavy envelope with the purple wax seal had arrived by special messenger. This was to be a night of celebration that marked the end of her school girl days and announced her and her school mates as “mostly grown up” witches.

Who knew that that an adult evening full of dancing and dining could send the family into such an uproar? Granted, it was her first grand formal affair, but the tizzy that the entire household had engaged in since the invitation’s arrival had sent him scurrying for the upper reaches of the house. He had borne weeks of frenzied discussion on the perfect dress, sophisticated hair styles, and the pros and cons of jewelry versus flowers. Agonies of spell work and hours of charm practice followed to ensure a clear complexion, feather light dance steps, and comfortable toes in elegant slippers, (in spite of less than nimble dance partners who crushed feminine feet).

He knew Amber was nervous and her mind was on too many things at once. He knew she worried about performing her assigned tasks well so that she wouldn’t disgrace her parents after all the years of expensive education. He adored her, and appreciated that she was a good friend and kind mistress who cared very much for his feelings. But, he also knew that he was not about to allow her to waltz out of their front door until she’d unraveled this latest spell gone askew, or, at least concocted an antidote to this slightly uncomfortable form he was currently inhabiting. Though she was normally very diligent, this current catastrophe made it clear that her mind was not on her magic as it should be. He wouldn’t be wearing wings and a raptor’s beak if she was on task and concentrating.

Magical mistakes. They’d been through them before. A year ago she had tearfully promised him “no more mistakes – if possible” after he’d reluctantly agreed to let her practice a fiendishly difficult shape shifting spell. It involved strange plants, smelly tonics and holding her breath while simultaneously clicking her tongue in an age-old rhythm. She’d almost managed it, but not quite.

She’d charmed a special collar for him to wear until his fur grew back in normally. (You couldn’t even tell where the bald patches had been unless you looked very carefully). She’d felt so bad that she’d brought him tiny fishes in oil, snippets of cheese, and bowls of cream sprinkled with nutmeg. She’d even made him a velvet cat pillow in his favorite shade of burnt orange. He’d allowed himself to be mollified. How could he not? She was his best friend and ally and this was his duty. He wondered if all young witch’s familiars went through the same trials and tribulations. He supposed that they did.

She had suggested that he may actually enjoy being a gryphon for a few days, at least until she had the time to devote to the study of where exactly her magic had been in error. His strident hiss and laid-back ears had let her know his opinion on that suggestion quite clearly.

And so they sat. She, ruffling through her memories of past failures and how they had been remedied. He, pondering this very intriguing life that they were living. It certainly wasn’t what he had expected, but then, he hadn’t really expected much. He decided he may as well indulge in some casual grooming while she worked out this dilemma. And then abruptly realized a wickedly pointed beak does not work in the same manner as a raspy tongue.

He wasn’t sure if this current coat was actually fur, downy feathers, or a combination of the two. It was long, thick, and deliciously warm, which was an improvement over his own short haired coat. That had been ebony black (as a witch’s cat should be) with just a small patch of white at his throat, but not overly thick, and he often felt the cold in the winter.

He’d quite liked his cat coat. It was the first coat he’d ever had and he was sentimental. After all, he’d started life as a shiny, black tea kettle who was mistakenly brought to conscious thought by a then nine year old Amber after a practice spell misfired and ricocheted around the kitchen. She’d noticed fleeting ripples of vague expression on his smooth surface and thought he needed a proper body in which to inhabit his new personality, so she went to work. (Amber was always precociously talented, though slightly prone to mishaps).

And, as she’d explained, she needed a familiar. All talented, young witches were able to bond with a familiar around the age of ten, which was the sign that they were ready to begin a decade of very rigorous formal training. Amber was long past ready to begin her studies, but had been waiting. She’d wanted an unusual cat, and she’d found one!

She bonded with the new kitten quickly, and never confessed to her family why she gave him the remarkable name of Kettle. She’d taught him how to be a mannerly cat, and promised him they’d find him a new name when he grew up. A name that would suit both his dignity and her witch status, but they’d not yet found one they agreed upon. He didn’t mind. Kettle had a nice sound. He was used to it after years of service in the kitchen, and he liked the sameness. Familiarity and sameness can be important, and nothing ever seemed to stay the same for long these days.

Yes, most of the time he was a sleek shadow that followed at her heels by day, and then curled up in the small of her back when she went to bed at night. But other times he found himself growing tall with eyes weirdly positioned at the side of a big head, burdened with heavy, metal shod feet and an annoyingly twitching tail, just so he could pull a foolishly flowered and beribboned cart full of giggling girls bent on a picnic.

He’d been made to grow bigger and then smaller, and had even been invisible (and “lost” for a whole afternoon because she couldn’t see him, and he didn’t really want to be found). He’d been several different colors and flavors, fat and thin, boned and boneless. He’d been sent on errands in the dark of night that still made him shudder, and he would never again be able to look at autumn leaves without remembering the hideous experience of being sent into the interior of the giant maple tree in their back garden. (He was supposed to count the rings so she could see how old the tree was without cutting it down. It didn’t work.)

It wasn’t always bad, though. Things had improved as she grew older and more skilled. And life was certainly never boring! It was much more interesting than his days as a kettle spent on the kitchen side hearth listening to the cook snore on her chair in the corner. Some of his forays into the magical realm had been enchanting and exciting, and often, just plain amusing. He’d spent all of last Tuesday as a rabbit so Amber could study and sketch him for a painting she was working on. (He’d never dreamed carrots tasted so good raw, and hopping was really quite fun!) He was pretty sure he was the only cat in history who’d ever been magicked so that he could swim to the bottom of the nearby sea and hum an ancient song to the oysters in order to coax them into making pearls in gorgeous new shades and colors. (All to match the fancy dress she was currently wearing).

Amber was his dearest friend. She’d given him voice, and form, and conscious thought. She’d taught him so many things. Perhaps he was being a tad unreasonable in demanding that she fix this latest mistake before she left for her elegant evening. She was so excited and overwrought that it might be more prudent to wait until she had the time and space to concentrate. Maybe this gryphon form might be acceptable, for a short time. He may very well end up in worse circumstances, if she tried again in this harried condition!

He’d never experimented with flying, which might be diverting, and he did enjoy this luxurious fur he was wearing. Come to think of it, maybe Griffin would make a nice official name. It sounded elegant, distinguished, and rather gentlemanly. And it would certainly eliminate the constant questions of why his name was Kettle!

On second (and third) thought, he believed he would wait for her to return from her grown-up fun, and then they could look into solving this latest blunder tomorrow, or the next day. She deserved her celebration, and he would enjoy trying out these wings. It wouldn’t be so bad, he was so nice and warm, and just look at those talons! They were spectacular and should really be tested out on the irritating mice in the barn. Hmmmm….on consideration, there may be several benefits to this new form!

Besides, he was sure this wouldn’t be the last time they were involved in shenanigans of the magical type. Amber was almost grown, but mistakes happened. She was still Amber.

And he loved her for it.

*(Painting is titled “Mistakes Were Made”)