The Owls of Parliament 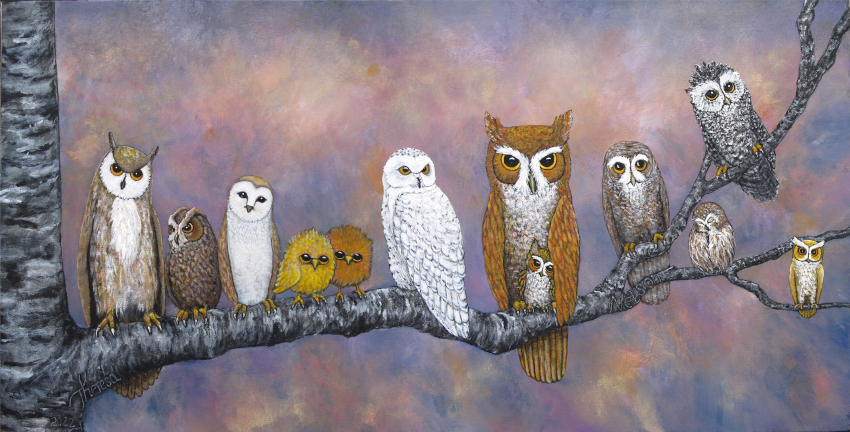 Owls are generally solitary creatures, but when seen together the group is called a parliament as they have long been considered to be of wise disposition.  The owls in this piece were created as a gift for a dear friend after a talk we had where he mentioned, “We are all different snowflakes.”  Each of these owls has a unique personality that developed as they came to life under my brush.

I’m very happy to introduce you to the owls of Parliament.

Athena – (the little golden owl at the far right). The owl is the symbol for Athena, the goddess of wisdom. You may remember the 1981 classic movie “Clash of the Titans”. In it was a little golden mechanical owl who accompanied Perseus on his quest. The owl was a clockwork replica of Athena’s own magical owl, “Bubo”, and was sent by the gods of Olympus to help (and he wasn’t great at it.) I suppose this little owl should have been named Bubo, but she is definitely a girl, so I went for Athena instead. I think she is rather cracked out with worry over the lack of wisdom currently being displayed by the human race and represents how we all feel at the beginning of 2022!

Ludwig – ( the dark owl above Athena). He has been around a very long time, is quite set in his ways and is sometimes a bit persnickety. But, his eyes hold stories fathoms deep beyond those feather spectacles. He will tell you, but only when the time is right. He tends to nag at you now and then, always for your own good. (And you hate that he is always right). When you finally sit and listen to what he has to say, you find that he is wise almost beyond understanding, but not quite. He will politely repeat his wisdom over and over for you until you catch on, but only if you ask, otherwise he will often let you learn by your own mistakes. He has seen much, through many lifetimes, always watching all things from a higher perspective. He’s the wizard, good fortune, clarity, your intuition, and the higher self rolled into one feathered, seriously smart, Mr. Magoo.

Zen – (the little sleeping owl) Zen is snuggled up in her own protective feathers, peaced out and completely unaffected with the continual chaos going on around her. She’s warm, dry, well-fed and happy to enjoy the present moment with a well deserved power nap. She is self care and contentment, and her mantra is “Fill your own cup so that you can overflow into the lives of others.” She will pester you to drink enough water and get your rest, but somehow rarely annoys you. She loves incense, mellow music, singing bowls, snuggly afternoons, and beauty sleep (in no particular order).

Copernicus – (brown & white owl). He is a Capricorn kind of guy. Rock steady, solid, enthusiastic and dependable, he works hard to take care of everyone else. He’s the supportive one who will be your umbrella and spread his wings to keep everyone else dry in a storm, even though he’ll gets drenched himself. He is driven and ambitious, but goes out of his way to be a good guy. He is strong and loyal, and you can always trust him with your secrets. He has your back and will continually be on your tag team. He can be all about practicality and tough love, but is unfailingly kind.  He’s the father/big brother/best friend.

Tiger Lily – ( Mama owl). She is the protective, fierce “don’t mess with me or my family” mama bear of the owl clan. The sassy female who doesn’t take lip from her kids, but will take you out if you dare to mess with those kids. She is routine and rhythm, balance and self control. She is a lioness with a multi-faceted, complex personality. Lily shelters her fluffy, innocent baby from every storm. She is safe harbor, maternal instinct, calm and comfort in the midst of chaos, and unending family support. Her life is never-ending details, but she is always beautifully groomed, with every feather in place!

Faith – (Baby owl). Safe under her mama’s wing, Faith is wide-eyed and half scared of the whole shindig she has been observing since the hatch. She is quite happy to stay with her mom until she has a chance to grow. She needs the chance to grow big enough and strong enough to remain constant in the outside world. She is softness, innocence, new beginnings and hope.

Bianca – (the snowy owl, and no, I don’t know why her name is Bianca, but it is!) She’s looking at her past over her shoulder. She is keeping a sharp eye out for things she may have missed or not previously considered. She often flies by feel, but logic is her friend. She is misleading strength dressed in pretty feathers. She is contemplating where she has been and soaking in all of the life lessons she has experienced. She is resting and rejuvenation, while considering the various options from numerous perspectives. She is the pause; the place to gather courage before leaping, most probably forward, and into her future.

Isabella and Angelina  –(the two puffballs) I refer to these two youngsters as the “Hell Kittens”. They are 15 year old twins (named after my brother’s twin girls who earned the original “Hell Kittens” title.) They are vivacious, glorious youth, ready to launch themselves into life because they are sick of being kids and adulthood still looks like fun. They think they are Ready, but they are trouble walking (flying). They are the teen-age screw ups, naïve foolishness, and misadventures that you will think of, and tell stories about, for the rest of your life (always with gratitude that you survived or didn’t get caught!) The two of them represent the bravado and optimism that we tend to lose as we grow older and more jaded. They symbolize the young adult, at the very beginning of the journey and quivering with giggles of anticipation. You want to warn them to be careful, but they wouldn’t listen anyway.

Beth – (the barn owl) She is the shy nature child, the introverted goddess of hearth and home who communes with bees and flowers. She is a crafty homebody, who loves to fuss over and feed her family, and is happiest among her chosen few. She befriends errant dragonflies and exchanges stories with air elementals while puttering about her nest. She is soft and sweet and would nibble gently at your earlobe if she were perched on your shoulder, just to remind you that she is there, and that she loves you. She loves to sing, but won’t sing in front of you. She is quiet times sitting by flowing streams and rivers. She is the breeze and tiny voices of the pines, fireflies, and home’s simple pleasures.

Hermione (second from the left) – This little, sharp eyed, wall flower is the slightly nerdy, genius smart, way too Virgo, perfectionistic watchdog of the group. She is always  kind, but will miss absolutely nothing and will probably find a nice way to tell you about it. She is prevention and hyper-vigilance and looks ahead to keep everyone she cares about safe. She doesn’t trust Plan A, so usually has plans B, C, D & E in reserve. She is wired like a greyhound, admits to being a workaholic, finds her self worth in productivity, and is a total insomniac. Don’t be surprised if she alphabetizes all of your dvd’s while you sleep. (Just to make things easier later on). She is structure and foundation, constancy and reliance, organization and orderliness (but totally needs to relax more).

Uncle Henry – (the tall guy next to the tree). Uncle Henry is almost a mood, or an attitude. He is still a bachelor because he was too shy to ever pop the question. He enjoys kids, so happily spoils everyone else’ s children and is  always willing to babysit in exchange for cookies, or pie. He loves a good picnic and has a heck of a singing voice. His favorite song is “A Horse with No Name” and he tends to hum it while he’s pondering, or right before he falls asleep. He tells the best stories, knows a million jokes, and always has a circle of avid listeners at his feet. He likes to tease and be a little sarcastic, but is the first one you would call if you got busted and didn’t want your parents to find out. He totally knows what you are up to and probably won’t rat you out, as long as you aren’t stupid. Sometimes he even slips you a beer after you mow his lawn. He will call you out with gentle humor, and then give you a half hug before he gently smacks your head and tells you not to be an idiot. He is trust and sentiment, fun and values, Glory Days and just figuring out the terrain to adulthood. He is old friends and hometowns, lazy summer days and lyrics to songs you knew when you were twelve. He is nostalgia for the way it used to be.