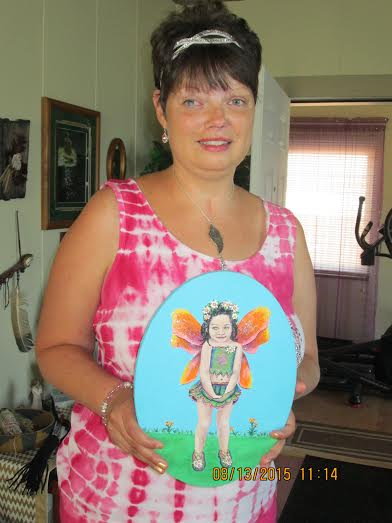 Flash forward about six years. The fairy craze died down. My creative nature had moved onward to other subjects, but I would still paint a fairy or two a year, just for fun. (Most often in the spring when the new flowers and sunshine would inspire me to venture Into the Woods.)

My all grown up, (still bull-headed – but very successful) daughter had flown home from her far away life for a visit. She enjoys a good scavenger hunt as much as her mother, and we have a very long history of taking an afternoon off to “shop for nothing”. We always share our special finds with each other if we are unable to shop together, delighting in each other’s “Scores”. She spent one whole lazy afternoon combing the local antique shops and thrift stores and, as always, came home with treasures to show me. She had one particular item she wanted to bring out, but was slightly worried it might upset me. Curious, I promised not to get upset; and watched while she unwrapped a small oval canvas, and then turned it over to reveal…. Tansy.

Should I have been upset to see one of my little paintings that I had expected to never see again? Life has an odd way of making sure things happen at the ultimate, perfect moment. What are the odds that my daughter, home for the first time in 18 months, would go into that exact shop, on the same day and time that Tansy was unpacked, priced, and set out on a shelf? Synchronicity at it’s finest! I was honestly… thrilled. It was like getting an unexpected visit from an old, dear friend. Tansy was just as bright and clear-eyed as when I had packed her up those years ago. Still smiling her charming little smile and flashing her colorful, glittering wings… she was good as new. She still looked as though she could be a bundle of mischief. She still looked at the world through a gaze that saw everything, childish innocence mixed with fierce intelligence beyond her years.

I imagined that the little girl she had belonged to had grown up and changed her bedroom decor right along with her teen-age tastes. Tansy had surely been outgrown, re-gifted and passed around. She had somehow ended up in the very store my daughter frequented that day in her ambling search “for nothing”. Nobody knew what her adventures had been or why she’d arrived in this place, but Tansy had come home.

I can understand why some people thought I could possibly be offended to find one of my creations put aside to end up in a second-hand store. But honestly, I really wasn’t. Our tastes in art and wall decor are so very personal and individual. Our inclinations change over time and we go through many phases and stages of what appeals to us at that moment. Art often gets replaced, handed on, sold, or given as gifts. Sometimes these gifts are appreciated and sometimes they are not! I have an artist friend who attended an auction and saw one of his older paintings come up on the block. (Of course, he bought it, took it home and probably sold it again.)

I firmly believe events like this happen for a reason. So, I thanked my daughter and took Tansy home where I enjoyed her company over the next year. Eventually I placed her back on the gallery wall to see if she wanted to find herself a new home. I felt that she might need a young girl’s spirit to live with. Evidently she did not agree. Over the following weeks, Tansy gathered fans and praise, and even had one little girl in particular who liked to come in weekly to pay her favorite fairy a special visit. But Tansy continued to live on the gallery wall for many months, stubbornly resisting all options of going elsewhere. I knew she was just waiting for that special somebody to come along, and would dust the iridescent glitter of her wings so that she remained shiny bright.

Later that year my mom introduced me to her new friend. A wonderfully interesting woman named Deborah who had recently moved to our small town. Deborah has quite a zest for life and she shares all that fun and energy with her adult daughter, Katie, whom she lives with and cares for.

Katie is one of those miracles-in-the-flesh that you read about, but don’t expect to meet on a random week day. I learned of Deborah’s devotion to her daughter and how they had come through some extremely rough times; a life-changing accident, and long, hard years of recovery. I looked forward to meeting Katie someday soon.

Knowing the bare bones of Katie’s story could easily make a person feel sad, but any trace of that feeling was wiped away when I finally met her. Gorgeous inside and out, she has a smile that lights up the room, and an infectious laugh that tickles like champagne bubbles. A bit shy, but very pleased to make a new friend, she and I spent some time talking and looking at her old photographs. Katie is not the same as she was before her accident and I know she has difficulties daily. She struggles and has hard days, just like the rest of us, but in that conversation I found her cheerfulness, quick-silver smile, and honest, open talk very special. In fact, I found her incredibly inspiring. The word ‘delightful’ comes to mind when I think of Katie.

Prompted by her images in her photo album, fairies came up in our conversation. When I asked if she liked them; Katie said no, she LOVED fairies! I clearly felt Tansy give me the mental nudge that meant “She is what I have been waiting for!”

I couldn’t ignore the urge. I had to go get her. I made my excuses to Deborah, got in the car, and drove downtown to the local gallery where Tansy was hanging. I wrapped her up, drove back to Katie’s house, and told her I had someone special for her to meet.

Watching Katie’s face as she unwrapped Tansy was something I will never forget. Clearly enchanted by the unexpected gift, Katie was enthralled with the image of Tansy on that small blue canvas. She touched the glittering wings, looked up at me, and gave me Such a Smile! They were obviously a match made in heaven. Sheer will and tenacity (and Deborah) had gotten Katie to the point she was at today. Against the odds, here she was!

Something like luck and tenacity had brought Tansy home and kept her hanging on that gallery wall until she could meet someone like Katie. Against the odds, here she was! I believe it was mutual love at first sight. Katie suggested that Tansy was not just a fairy, but also an angel…probably a guardian angel. I didn’t doubt it. Since I’d been told that Katie had angelic experiences while in the hospital, I figured she would be the one to know.

Tansy now lives on Katie’s bedroom wall and has become the Guardian Fairy of the house. She takes her role as Katie’s comforter very seriously. Deborah tells me Katie talks to Tansy on difficult days. They share secrets and I’m sure Tansy has many reassuring words for Katie. They balance each other.

The return of Tansy did not hurt my pride as an artist. Their adventure is a tale that delights my writer’s heart, and creates much enjoyable speculation in my artist’s mind. I know that I cannot control my creation’s fates when they leave my home, but wish each and every one of them love and luck…and then think of the adventures that may lie in wait for each painting as I ship it off into the world! (What interesting places or people might become part of their lives?) I’ve never been after fame and fortune with my art…though I’m certainly not opposed to it. I simply paint what makes me happy and then stand back and see if other people like it. My pride swells when I know an image I brought to life occupies a special place in someone’s world. My pride and my heart swell when I think of Tansy….being a Guardian Faerie is about as special as it gets.