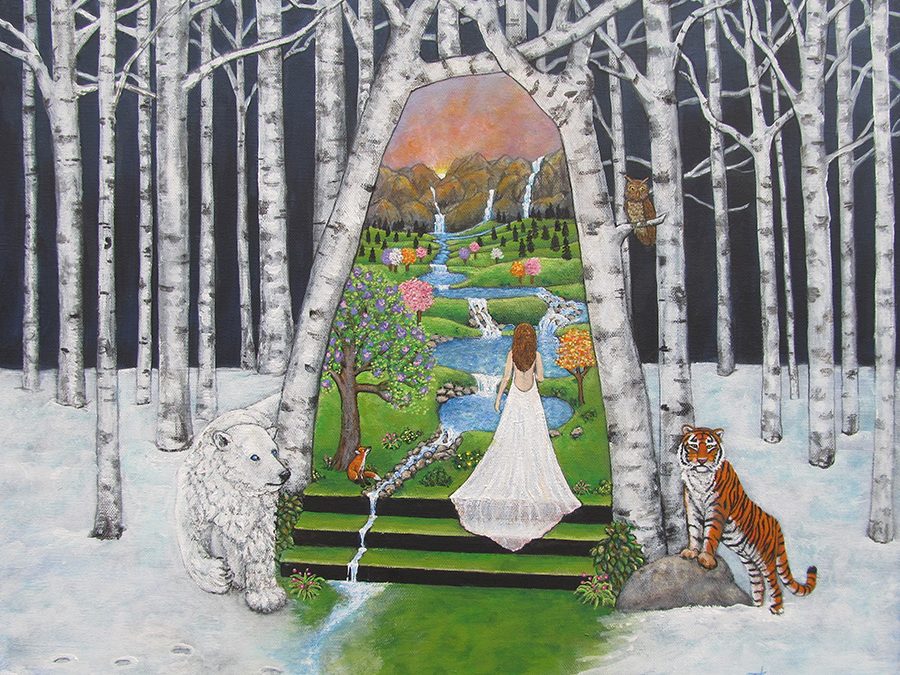 She’d been dwelling in the frozen, snowy lands of winter for long ages. Had spent her days wandering through dark forests of longing and despair, alone but for the companionship of her chosen few. Each had appeared, one by one, in response to the quiet whispers of her heart carried upon chilly night winds.

Owl had found her first. That legendary bird of magic and trusted scout of darkness; able to see the world’s subtleties and what lies lost and hidden in the shadows. On silent feathers born of prophecy and wisdom, he glides ahead to mark the path she was born to find and learn to follow. His treetop perspectives and understanding of sensitive souls and their secrets have guided her on her way since early childhood.

The Great White Bear, her silent, nearly invisible partner showed her incredible wonders during their many years of travel. Often tiny, quiet things that went unremarked until a lesson of Life was attached to their mistaken identity of smallness. With him, she learned of Silence and Epiphany, Solitude, Spirit and Quiet Courage. He was known as the great Wanderer and was quietly teaching her the ways of moving between one realm and the next. He moved with ease between worlds in much the same way that he was able to smoothly glide between land and water. He swam with her in the chill, subterranean depths of sorrow and self. With his help, she learned to distance fear and stride ever forward in spite of threatening uncertainty. He gave her the lead on their journey, but was always at her side, a solid wall of comfort.

Tiger, he of the enchanting amber eyes and muscled, sleek power, came next and swept her away into never imagined places, and epic adventures. His infectious enthusiasm for life became the necessary momentum to propel her forward when her feet became too rooted in dull, exhausted sameness.  He was fiercely protective and she blissfully nestled into long-sought safety at his golden side. Tiger’s passionate devotion, gallantry and support became her keystones. He was her True North. His strength was willingly lent to augment her own. He was the guiding force and reason they had finally found their way to the fabled Birch Threshold.

Fox was the latest arrival. A feisty little shape-shifter who burst into her quiet days like a tiny cyclone.  Fox loved to make her forget her habits of serious deep thoughts. He reminded her there was always time for fun and games. Bright droplets of joy were always available, like drops of nectar from flowers. Smiles and laughter at his silly antics rode in the wake of his bushy tail, but he never allowed any of the group to forget that he was a clown only by choice. Under his impish qualities lived an edge of otherworldly sharpness.  He walked at life’s edges and was by nature a creature of the Between Times, those moments when dusk fades into dark and night blooms into dawn. He made it known that he was a guide into the other realms, and they were now at a place where perceived reality and magic intersect.

The Threshold. She had been searching for decades, instinctively knowing that it existed even when her logical mind questioned and worried; and now, suddenly, here it was. All she had to do was walk a few more paces through the glimmering portal into a new phase of life. She must be willing to leave the comfort of familiarity and move into longed for green lands of sunshine, change and potential, Her companions had brought her this far and she was eternally grateful for their guidance.  She took a deep breath, raised her face to the welcome warmth, and stepped out of the snow onto soft green grass. A new world awaited her and she was ready.

Please click here to see more of “The Threshold”: https://www.owlsflight.com/galleries2/dreamscapes/